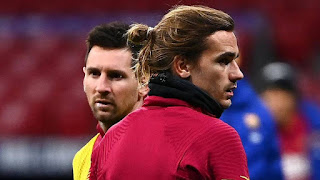 Marc van Basten has targeted Lionel Messi and Antoine Griezmann after the two forwards' performances in Barcelona's 1-0 defeat away to Atletico Madrid last Saturday night.
The Blaugrana created little against Los Rojiblancos and now find themselves sitting 13th in the table, 12 points off leaders Real Sociedad.
"Simply they are playing bad now," Van Basten said on Ziggo Sport.
"Messi and Antoine Griezmann are playing like two people without purpose."
In fact, Van Basten used the Dutch expression "Stelletje koekenbakkers" when discussing the Argentine and Frenchman, which literally translates to a "bunch of bakers". This is a set phrase which refers to people who do a job without any notion of what they are doing or in a sloppy or clumsy way.
Messi has already come in for some criticism this season, with some wondering if he is truly invested after being forced to stay at the club last summer, but Van Basten has pointed to a couple of factors that could be affecting the 33-year-old's performance.
"He will no doubt be annoyed that there is no crowd," the Dutchman said of Messi.
"Besides, he has not trained much in the last few months; he has done little work. He is not happy with the situation in and around Barcelona.
"And then there's that mess with Griezmann. It's an accumulation. We don't know him like that at all."
It was a terrible mistake from Marc-Andre ter Stegen that cost Barcelona against Atletico, with the German goalkeeper opting to come out of his goal by almost 50 yards, only to get nutmegged by Yannick Carrasco, who then fired a shot towards the empty goal.
"That goalkeeper, that goalkeeper... I keep seeing goalkeepers coming out of their goal, thinking: stay on the goal line," Van Basten lamented.
"There was still no danger. There were two more defenders there, he shouldn't have done that at all. Why is that goalkeeper there [so far away from his goal]? That can't be explained."
Football Laliga