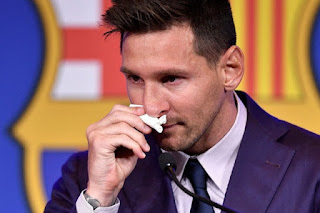 Former Barcelona president Josep Maria Bartomeu has found himself back in the limelight despite calling an end to his unpopular reign at the Camp Nou last October, as the ramifications of his poor management continues to ramble on. Everything culminated with Lionel Messi's shock departure from the club, with the current board pointing to the financial mismanagement from the previous regime as the reason for this.

The Argentine icon, despite handing in a transfer request in the summer of 2020, decided to remain in Catalonia and had agreed terms for a new contract with Laporta. However, the dire financial situation at the club—Barcelona were over their wage limit—meant that the Spanish giants could not register La Pulga, nor their summer signings.

After trying several creative ideas, the club were forced to put an end to their attempts and announced their all-time top scorer would be leaving the club after 21 years. Laporta held a press conference the following day, stating that the financial mess he inherited from Bartomeu meant his hands were tied.

However, Bartomeu has now hit back, breaking his silence in order to defend his name amid the onslaught of criticism. The 58-year-old has written an open letter to address several of the issues, arguing that the club's excessive losses are due to Laporta's "inaction".

"As is known, our Board of Directors planned to call elections on March 21, 2021, within the statutory period at the end of our mandate, which would have allowed us to take on and carry out the settlement of the 2020-21 season accounts, as was our wish, and take the decisions necessary to avoid arriving at the current financial situation," Bartomeu said, as per Marca.

"We would have been the only ones responsible for the closure [due to the pandemic] and its consequences. Decisions that the new Board has not taken throughout these past months, making clear their inaction."

The ex-president went into further detail, stating that he had begun negotiating potential commercial deals that would have offset the COVID-19 devastation. He argues that had Laporta carried on with the plan, they would have been able to register players. In other words, Bartomeu is pinning the failure to keep Messi at Barcelona on the current commander-in-chief.

"From April 2020 we began the Barcelona Corporate project, consisting, in summary, of the entry of four strategic partners..." says Bartomeu in his letter.

"If [Laporta's] Board had approved the [Barcelona Corporate] project, it would have meant a capital injection of at least 220 million euros with the aim of reducing the income losses caused by COVID...which in 2020-21 could be 375 million.

"If to those 220 million euros we had added the necessary 20 percent salary reduction (90 million euros) from the players' contracts, essential from March 21, 2021, when the worst expectations were confirmed, the salary ratio dictated by LaLiga would have been complied with, allowing for players to be registered."

There were more digs aimed at the current president, which could spark a rebuttal from Laporta. Will the Camp Nou executive issue a response? Will the dissent Barcelona fans hold for Bartomeu decrease after this open letter? It will be interesting to witness the reaction to this development.