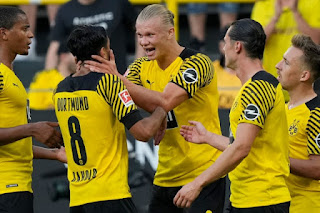 The top football category in Germany started with lots of goals, excitement, and games that gave fans a good show in the first batch of games this season. Teams such as Stuttgart, Borussia Dortmund, Hoffenheim and Köln were off to a massive start, while Bayern München did not have the best beginning of a season under new boss Julian Nagelsmann.

There were 27 goals scored on Matchday 1, making it one of the most prolific starts of the season in the German top-flight. On top of that, players from different teams reached personal milestones in a weekend that should be the start of something interesting in this division.

Without further ado, here are the main talking points after Matchday 1 in the Bundesliga.

Who are the top five Bundesliga teams for the 2021-22 season after Matchday 1?

Stuttgart made the most of their clash against the recently promoted Greuther Fürth, while Hoffenheim claimed a huge victory over Augsburg. Speaking about the title contenders, Borussia Dortmund kicked off with a bang after beating Eintracht Frankfurt with a 5-2 score, where Erling Haaland had to do with four of the black and yellow's five goals.

And what about the champions? Well, Julian Nagelsmann's team was only able to collect one point, which means that Bayern München will not sit among the top five teams after Matchday 1.

Three players started their run in the competition by scoring a brace: Erling Haaland, Marc-Oliver Kempf, and Florian Kainz. Out of these bunch, Haaland's contribution to Dortmund's win also saw him hand out two assists, establishing himself as quit the offensive threat for the Black and Yellow.

RB Leipzig vs Stuttgart: Die Roten Bullen were not off to a good start, and facing one of the current league leaders will surely put their ability to bounce back to test. It may be a bit early in the season to call Stuttgart a title contender, but if they can come up with a performance such as the one they had against Greuther Fürth, then Bundesliga experts should really take them seriously.

Freiburg vs Borussia Dortmund: Freiburg will have their first home game of the season after a disappointing goalless draw against Arminia last week. Meanwhile, Dortmund were off to a great start, and claiming a win here would be a good sign of things to come for Marco Rose and his project at Signal Iduna Park.

Bayern vs Köln: The defending champions were not as impressive as some may have imagined, and in their first game at home, they will try to clam a win that will calm down the worst fears for Julian Nagelsmann and the team's supporters. As for Köln, the Billy Goats were off to a winning start against Hertha, but beating the current Bundesliga champions will be a serious test to their chances of success in the competition.