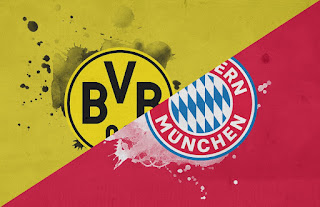 The intense speculation surrounding Erling Braut Haaland's future has clearly not impacted the Norwegian's prolific goalscoring prowess, as the Dortmund talisman had a hand in all five of his side's goals in an opening-day thrashing of Frankfurt on Saturday. After netting all three of his side's goals in the DFB-Pokal against Wehen Wiesbaden, Haaland scored two goals and set up three more against Frankfurt - with Giovanni Reyna, Thorgan Hazard and Marco Reus also opening their accounts for the campaign - as Marco Rose's side stormed into the top three after one game. Of course, it was inspired performances from Haaland, Reus and the now-departed Jadon Sancho that saw Dortmund book their place in this year's German Super Cup, with the trio registering two goal contributions apiece in a 4-1 thrashing of RB Leipzig in last year's DFB-Pokal final, and BVB lifted the Super Cup as recently as 2019. With Bayern now confirmed to be one of the many clubs ready to enter an intense bidding war for Haaland's signature, the red-hot Scandinavian would love nothing more than to propel his side to more silverware over his admirers, who are mourning the loss of one of their greatest ever goalscorers.
Gerd Muller lived to witness Robert Lewandowski break his long-standing Bundesliga goalscoring record after the prolific Pole notched up 41 league goals last term, but the 566-goal icon was confirmed to have died on Sunday afternoon, at the age of 75. A World Cup, European Championship, three-time European Cup and four-time Bundesliga winner, Muller found the back of the net 15 times in 20 games for Bayern against Dortmund - including four strikes in an 11-1 thrashing of BVB back in 1971 - and Tuesday's game will certainly have an added feel of emotion to it following the Ballon d'Or winner's passing. In a turn of events that surprised very few, Muller's successor Lewandowski did get on the scoresheet during the opening day of the Bundesliga season, but his goal on the stroke of half time could only rescue a point for the Bundesliga winners after Monchengladbach's Alassane Plea took 10 minutes to open the scoring.
Julian Nagelsmann had to deal with numerous absences during a challenging pre-season campaign - in which Bayern won a grand total of zero matches - so while his side have won four of the last five Super Cup editions, their favourites tag is not shining so bright. However, Bayern have come up trumps in their last five meetings with Dortmund in all competitions - including a 3-2 win in last year's Super Cup - although the Black and Yellow have managed to win three of the seven clashes between the clubs in this curtain-raiser.
Borussia Dortmund form (all competitions):
Bayern Munich form (all competitions):
Dortmund continue to make do without a hefty contingent of players through injury or illness, with Thomas Meunier and Julian Brandt out after testing positive for coronavirus earlier this month, while Mateu Morey and Dan-Axel Zagadou are long-term injury victims. Rose's defensive ranks have also been depleted by the losses of Mats Hummels (tendon) and Raphael Guerreiro (calf), and while the former has returned to the training pitches, he will most likely miss out against his former club. Emre Can also missed Saturday's opener against Frankfurt despite previous optimism over his availability, so Axel Witsel may once again be forced to deputise in defence alongside Manuel Akanji, and Thorgan Hazard will miss out with an ankle issue. Meanwhile, Bayern lost right-back Benjamin Pavard to an ankle injury before their clash with Monchengladbach, and the Frenchman may now reportedly be out of action for at least a month. Lucas Hernandez, Marc Roca and Corentin Tolisso completed a quartet of absentees for the champions on the opening weekend, although the latter is now back in full training, while Alphonso Davies played the full 90 minutes against Monchengladbach in a huge boost to Nagelsmann. Lewandowski has needed no second invitation to fire against his former club with 22 goals in 23 games against BVB, but he only boasts one strike from five editions of this fixture in the Super Cup.
Football