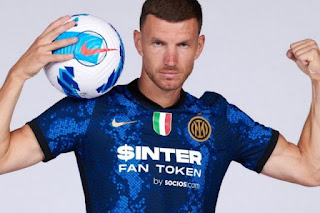 It's safe to say that this summer has been a rather difficult one for Inter fans. First, they witnessed the departure of manager Antonio Conte, who guided the Nerazzurri to their first Scudetto since 2010. The second major blow came with Romelu Lukaku returning to Stamford Bridge following Chelsea splashing major cash for his services. Although they've attempted to rebound by bringing in veteran striker Edin Dzeko from Roma and former Lazio boss Simone Inzaghi to lead the side, there's still an air of uncertainty among the majority of Inter fans and whether the team will be able to remain fully competitive in Italy as well as in Europe.

In addition to losing both Conte and Lukaku, Inter are now without key defender Achraf Hakimi, who also made a huge money move to another cash-rich side, PSG, earlier this summer. Inzaghi will certainly have a huge task ahead of him, but clearly Inter's board thought the former striker up to the task. After all, he notably guided Lazio into fourth spot during the 2019/2020 season, which was enough to secure a Champions League league berth for the Aquile for the first time since 2007.

Meanwhile, Genoa endured a turbulent time last season. At one point, the Grifone were actually hovering just above the drop zone before pulling themselves out of their funk and battling their way to a mid-table finish. They're now under the tutelage of Davide Ballardini - for the fourth time - and it remains to be seen whether he'll be able to ensure they avoid that dreaded roller coaster ride this season.

Inter: Lautaro Martinez will miss this match due to a muscular injury, while Christian Eriksen out for the long haul as he recovers following his collapse during EURO 2020. This match will likely see the full debuts of new signings Hakan Calhanoglu and Edin Dzeko, brought in from Milan and Roma respectively.

Genoa: Valon Behrami and Mattia Bani are both banned for this match, but otherwise, the visitors will have everyone else available.

Live elsewhere? Here's where you can watch Inter vs Genoa live from your current location: