Jimenez reveals doctors said it is a miracle he survived 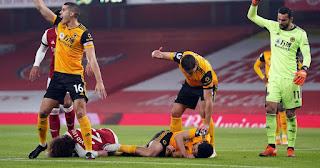 Wolves forward Raul Jimenez has revealed doctors told him it is a miracle that he survived his fractured skull suffered after a clash of heads in November. Jimenez made his return to Premier League action in Saturday's 1-0 loss to Leicester City after eight months out following the sickening accidental collision with Arsenal's David Luiz. During a lengthy on-field delay, the Mexican was put on a stretcher and given an oxygen feed, before he was taken to hospital for emergency surgery. There were initial fears that the 30-year-old may never play again but he revealed the concerns were greater than that when he fronted the media on Tuesday. "With the skull fracture, the bone broke and there was a little bit of bleeding inside the brain," Jimenez said. "It was pushing my brain to the inside and that is why the surgery had to be quick. "It was a really good job by the doctors. The skull fracture did take a little longer to heal than we all expected but it is a miracle to be here with you." He added: "Since the first moment they told me what happened and the risks. They told me it was like a miracle to be there. Because they are doctors they have to tell you the truth and you have to take it. Sometimes this is not what you want to hear but it's their job." The Mexican has no re-collection of the incident and spent 10 days in hospital after the emergency surgery. Jimenez outlined the long road back to competitive football, having resumed training with team-mates in May, insisting he always felt he could get back. "I always felt it was maybe like an ankle injury or a knee injury and that after my recovery, I'll be back doing what I love to do," the former Benfica and Atletico Madrid forward said. "I never thought about finishing my career or stopping playing. There was a chance of that but I was always confident I was going to return." Jimenez has been a sensation for Wolves since their promotion to the Premier League, netting 30 top-flight goals across his first two full seasons at the club. He had scored four goals in 2020-21 prior to his injury at Emirates Stadium, with Jimenez's absence dealing a big blow to Wolves last term.