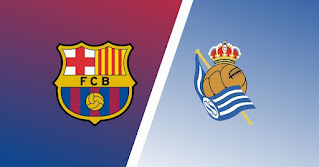 Barcelona will be attempting to make it five La Liga victories in a row when they continue their domestic campaign away to Real Sociedad on Sunday night. The Catalan giants are currently second in the table, four points behind leaders Atletico Madrid, while Real Sociedad occupy fifth position, nine points behind fourth-placed Sevilla.

Unless something dramatic happens in the final months of the season, Real Sociedad will be unable to claim a top-four finish as they are currently nine points behind fourth-placed Sevilla on the same number of matches. The Basque outfit are currently in charge of fifth position, though, sitting three points clear of sixth-placed Real Betis, and they will be determined to ensure that they finish just outside the top four. Imanol Alguacil's side, who finished sixth last season, had been on a strong run in the league, remaining unbeaten in seven matches, before suffering a 1-0 defeat to Granada last weekend. Real Sociedad were also recently knocked out of the Europa League by Manchester United, but they will have the chance to win some silverware at the start of April, facing rivals Athletic Bilbao in the rearranged Copa del Rey final from last season, which had to be postponed due to the coronavirus pandemic. The White and Blues have lost their last two league games with Barca, but the two teams played out a 2-2 draw when they last locked horns in San Sebastian in December 2019.

Barca, meanwhile, will enter this weekend's clash off the back of an impressive 4-1 victory over Huesca on Monday night; Lionel Messi netted twice for the Catalan giants, while Antoine Griezmann and Oscar Mingueza were also on the scoresheet at Camp Nou. Ronald Koeman's side were knocked out of the Champions League by Paris Saint-Germain earlier this month, but they will face Athletic in the 2021 Copa del Rey final in the middle of next month and will also still believe that they are capable of catching Atletico at the top of the table. Barca, as mentioned, are currently second in the division, four points behind Atletico, but Real Madrid are also very much in the title argument, with the reigning champions just six points off the summit. Koeman's team have won each of their last four in the league and 11 of their last 12, while they are unbeaten in Spain's top flight since a shock 2-1 loss at Cadiz on December 5. The 26-time Spanish champions have the third-best away record in the league this term, but Real Sociedad have only suffered two home La Liga defeats in 2020-21 - a record only bettered by Atletico and Barca.

Real Sociedad La Liga form:
Real Sociedad form (all competitions):
Barcelona La Liga form:
Barcelona form (all competitions):
Real Sociedad will again be without the services of Luca Sangalli, Miguel Moya, Joseba Zaldua and Aritz Elustondo through injury, while Nacho Monreal, David Silva, Martin Zubimendi and Carlos Fernandez are doubts. Head coach Alguacil is expected to resist the temptation to make wholesale changes from the side that suffered a 1-0 defeat to Granada last weekend. There could be an alteration in the final third of the field, though, with Portu replacing Adnan Januzaj, but there will again be starts for Alexander Isak and Mikel Oyarzabal, while the home side will hope that David Silva can shake off a back complaint to feature in midfield. As for Barca, Philippe Coutinho, Ansu Fati and Sergi Roberto are still unavailable through injury, while Gerard Pique is again expected to miss out with a knee injury. Ronald Araujo made his return from injury off the bench against Huesca, but Frenkie de Jong could again be given the nod alongside Mingueza and Clement Lenglet as part of a back three. Pedri and Sergio Busquets should start as the midfield two, while Koeman is unlikely to make alterations to his attack, with Messi again being joined by Griezmann and Ousmane Dembele.
Football