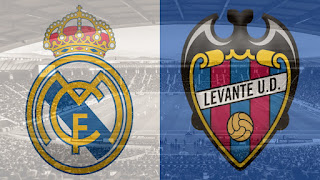 After conceding the La Liga title to Atletico Madrid last term, it is imperative for Real Madrid to come back strong this season. The Spanish giants started the campaign in fine fashion, securing a convincing 4-1 victory over Deportivo Alaves. On Sunday, they travel to Ciudad de Valencia to face Levante. It is the second of their three consecutive away matches in La Liga, before they finally return to the iconic Santiago Bernabeu, shortly after the international break. Until then, Carlo Ancelotti’s men will be hoping to maintain a hundred percent winning record to put early pressure on arch-rivals Atletico and Barcelona.

Levante, though, could be a tricky test for Los Blancos, who had stumbled to a 2-1 defeat when these two teams last met each other back in late January. It was a costly defeat for Real Madrid as it allowed Atletico Madrid to remain on top in La Liga title race. The visitors cannot afford to make the same mistake when they take on the Granotas once again this weekend. And here, at The Hard Tackle, we will run the rule over these two sides ahead of their important matchup in Laliga on Sunday.

It is not too difficult to predict Levante’s tactics as they predominantly operate with a 4-4-2 that sees two banks of four covering Aitor Fernandez in goal.

There haven’t been too many personnel changes either, with experienced club captain Jose Luis Morales set to spearhead the frontline. The veteran forward will essentially be replacing the injured Roberto Soldado alongside the more technically adept figure of Roger Marti. The hosts have more quality in midfield, where the highly creative double-pivot of Jose Campana and Gonzalo Melero should be tasked with the responsibility of finding attackers behind the backline.

Real Madrid have lost a few creative players this week, with Martin Odegaard joining Arsenal on a permanent deal while Luka Modric has picked up a groin injury. The veteran Croatian will miss this clash, joining Toni Kroos, Dani Carvajal, Dani Ceballos, Marcelo and Ferland Mendy in the list of absentees.Given the depleting numbers in midfield, Carlo Ancelotti might be forced to start Isco, though the Italian tactician also considers Marco Asensio in that attacking midfield role. In fact, he might just end up taking a gamble on Asensio, who has stagnated as a winger in recent years and might relish the opportunity to operate in a new role. The Spaniard will largely play alongside Casemiro and Federico Valverde in the three-man midfield setup for Los Blancos. Asensio will operate in the most advanced role, hoping to provide supply for the exciting front trio of Gareth Bale, Eden Hazard and Karim Benzema. Benzema is fresh from signing a contract extension at Bernabeu while Ancelotti has put his faith in Bale. The Welshman is still not up to his usual best, but he can make a difference. Real Madrid do have Vinicius Junior and Rodrygo as potential alternatives, should they prefer more dynamism in the final third. Defensively, the injuries of Marcelo and Mendy has forced new signing David Alaba to operate at left-back. He may continue to do so this weekend, with Lucas Vazquez occupying the opposing flank. Alaba should understandably remain deep to provide the balance, knowing Vazquez will make marauding runs forward at every given opportunity. It could see the Austrian international oscillate between a centre-back and a full-back role, with Nacho occasionally moving out wide to cover his teammate on the right hand side.