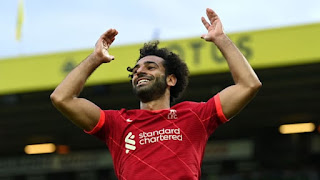 I'm sure there were thousands of supporters up and down the country suffering from football burnout this summer, and the thought of the Premier League's return was too much to handle. Well, 90 minutes into the campaign, and having watched Arsenal crumble against newly-promoted Brentford under the lights of a rocking Community Stadium, we'd been pulled straight back in. Unless you're a Gooner, of course. The rest of the weekend lived up to the standards set by Friday night's curtain raiser, and we're all back in full swing for round two. There may be no Friday night football this time round, but that means we've got even more to look forward to on Saturday and Sunday. All eyes will be on how Manchester City bounce back from their shock defeat to Tottenham, if Manchester United can keep up the intensity shown in their smashing of Leeds United, and how many hat-tricks Romelu Lukaku will score on his Chelsea debut against the Gunners. We can't wait. So, let's dig into 90min's predictions ahead of another rock and roll weekend of Premier League action.

Where is it being played? Anfield TV channel? BT Sport 1(UK), fuboTV (US)

This clash may not carry the intrigue that Brentford vs Arsenal delivered, or the fierce hatred between Man Utd and Leeds, but there is some narrative to chew on. Burnley were one of the many teams that beat Liverpool at Anfield last season, kicking off their club record six straight home losses. It'd be a huge shock if history were to repeat itself on the second week of the season, however. Jurgen Klopp's men are hungry to prove to the doubters that they are title contenders, and Burnley could suffer the brunt of their ire. The Clarets are on the hunt for their first points of the season, but we don't think they'll be leaving Anfield with anything more than a battering.

Where is it being played? Villa Park TV

It was an extremely poor opening day showing from both Aston Villa and Newcastle United last weekend, after they collected a grand total of zero points between them. Villa were rocked by newcomers Watford, who raced into a 3-0 lead before the visitors pulled back two late strikes, while the Magpies were on the wrong end of a 4-2 defeat to West Ham in a very entertaining clash. Both teams need to get off the mark, but we fancy things to click into gear for the Villans on Saturday. Danny Ings has already opened his account, and he'll have liked what he saw from the leaky Newcastle defence against the Hammers. He could have some fun.

What time is kick off? 15:00 (BST)
Where is it being played? Selhurst Park
TV channel? fuboTV (US)

The Bees are buzzing after Friday's curtain raising victory over Arsenal, but over at Selhurst Park, the atmosphere has already gone flat. Crystal Palace were hammered 3-0 by Chelsea at the Bridge, and Patrick Vieira is having nightmares of a Frank de Boer style reign.

He needs points to get the season started, while Thomas Frank will be challenging his Brentford players to remain unbeaten for another week. The Eagles will be a different proposition in front of their own fans, who are known for making plenty of noise.

It'll be an entertaining match-up, but it's hard to split the two sides at this stage of the season.

Leeds supporters have probably just about climbed out from behind their sofas, which is a good thing, because there's another game coming up. Fresh from the 5-1 destruction at the hands of rivals Man Utd, the Whites finally welcome Premier League football back to a packed Elland Road when they take on Everton.

The Toffees got off to a perfect start in their 3-1 win over Southampton, and Rafa Benitez will be demanding signs of consistency from his players. A trip to Leeds is never easy at the best of times, and their fans will be bang up for this one.

Everton have got quality all over the pitch though, making these two teams tough to separate. A score draw would be a decent outcome for both sides.

What time is kick off? 15:00 (BST)
Where is it being played? Etihad stadium
TV channel? fuboTV (US)

Man City suffered a disastrous start to their title defence at the hands of Spurs, losing 1-0 on an intense afternoon in north London. You have to fear for Norwich City then, who are sleepwalking into the cage of a very angry grizzly bear.

The Canaries were stuffed by Liverpool on their return to the top flight, and it's not going to get any easier for Daniel Farke and his players. Sorry to say, but we could be about to witness a real drubbing.

We predict plenty of goals in this one, although they should all fall for the same team.

What time is kick off? 17:30 (BST) Where is it being played? Amex stadium TV channel? Sky Sports (UK) fuboTV (US) There were winning starts all round for Watford and Brighton on Gameweek 1, after the Hornets defeated Villa, and the Seagulls came from behind to stun Burnley at Turf Moor. It's a dream start for the pair, who are expecting to be fighting off relegation this season. With points already on the board, Brighton and Watford will want to maintain their unbeaten starts. Expect the Hornets to be a little less open away from home, and Brighton have struggled to get wins on the board at the Amex in the past. A draw could be on the cards, although goals may be at a premium. Brighton predicted lineup Watford predicted lineup Prediction: Brighton 0-0 Watford