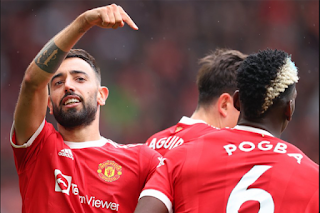 Manchester United kicked off their 2021/22 Premier League campaign on Saturday, taking on Leeds in the early weekend showdown. After spending heavy in another summer transfer window, fans were eager to see the Red Devils put down a marker from matchday 1 in the title race, and that's just what Ole Gunnar Solskjaer's side.

After coming close to breaking the deadlock on several occasions, the home side finally found the opening goal right on the half-an-hour mark, with Paul Pogba setting up Bruno Fernandes for a lovely goal. Three minutes into the second half and Leeds were level, equalizing through an excellent Luke Ayling effort, but the Old Trafford side killed off the game shortly afterward in a devastating eight-minute spell.

Within four minutes, Mason Greenwood restored Man United's lead, latching on to a superb Paul Pogba through ball to slot right past Meslier. Two minutes after that, Bruno got on the scoresheet once again and completed his brace thanks to a little help from goal-line technology. Once again, this goal was set up by Pogba.

Right on the hour mark, the former Sporting CP sensation got his hat-trick, making it 4-1, before Fred scored the fifth goal of the game, assisted by—you guessed it—Paul Pogba. The stellar performance from the Portuguese and French superstars saw both men make history.

Bruno broke a 44-year record, becoming the first Man United player to score a hat-trick in the opening weekend of a league season since Lou Macari against Birmingham in 1977-78. Pogba, on the other hand, became the first Old Trafford player in history to register four assists in a single Premier League game. Only six other players have pulled this off in the English top-flight and none were from the Red Devils!

Speaking after the game, head coach Ole Gunnar Solskjaer labelled that performance as "the perfect start", hailing both the players and the return of fans to the stadium. Check out his post-match interview below.