Premier League: Arsenal vs Chelsea and more top fixtures to look forward to ahead of Matchday two 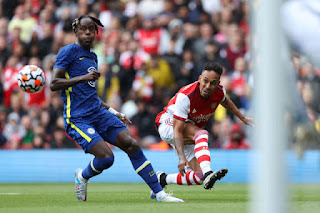 The first of the 38 rounds of matches to be played this season concluded last weekend to usher football fans into yet another enthralling campaign. For the first time in over 18 months, stadiums were allowed to be filled to full capacity and just as expected, fans were treated to series of spectacles in various match centers with the help of the infectious morale they brought into the venues. Indeed, the fact that none of the 10 games played ended in a draw was a testament to the difference that the presence of supporters in stadiums can make. With many of the household names starting off on a good note, a handful were also made to go back to the drawing board for failng to turn up.

The most notable defeat can be attributed to Arsenal after being stunned 2-0 by newly-promoted Brentford. Some way to get a first top-flight win after waiting for 74 years, right? With Manchester United, Chelsea and Liverpool all getting the better of Leeds United, Crystal Palace and Norwich City respectively, defending-champions Manchester City handed Nuno Espirito Santo the perfect gift to usher him into a new era as Tottenham Hotspur boss with their 1-0 defeat.

Ahead of Matchday 2, here is all you need to know to catch a glimpse of the action-packed weekend:

Top games to look forward to on Matchday Two

Liverpool vs Burnley: The former defending champions have been largely written off in the title race this season but will hope to add to their impressive start when they welcome Burnley to Anfield in the first game of the second round of matches. Having barely survived relegation last season, Sean Dyche's men will be approaching the game on the back off a disappointing 2-1 defeat at home to Brighton & Hove Albion on matchday 1.

Leeds United vs Everton: After taking a 5-1 hammering against Manchester United at Old Trafford, Marcelo Bielsa side will be poised to flaunt their attacking prowess once more and make amends when they welcome Everton to Elland Road. On the contrary, Raphael Benitez's men will look to harness the comeback spirit that fired them to a 3-1 win over Southampton at Goodison Park after conceding the game's opener.

Southampton vs Manchester United: Another Premier League classic was birthed when these two sides went head to head in the first round of the 2020/2021 campaign. After going into the half-time break with a two-goal deficit following a James Ward-Prowse masterclass, Manchester United sparked an extraordinary turn-around to clinch a 3-2 win. Substitute Edinson Cavani emerged as the hero with the assist for Bruno Fernandes to reduce the deficit and two goals of his own to secure the win. The other meeting between the pair is one that no fan of the Saints will feel confortable recalling having witnessed their club on the end of a 9-0 hammering. On Sunday Southampton will be eager to rewrite history and potentially deal the Red Devils an early upset in their quest for supremacy this season.

Wolves vs Tottenham Hotspur: Nuno Espirito Santo would have probably wanted to wait a bit longer before returning to his former stomping grounds with a different set of players ready to battle for three points. The Portuguese manager will be optimistic about Spurs' chances as they seek to build on the 1-0 win the picked up against Manchester City. On the other hand, his nemesis Bruno Lage will be out to prove a point after marking his Premier League debut with a 1-0 defeat to Leicester City.

Arsenal vs Chelsea: This is undoubtedly the biggest game of Matchday two with the two London clubs set to rekindle the rivarly between them. Arsenal picked up a shock 2-0 defeat against newly-promoted Brentford while Chelsea added to their UEFA Super Cup triumph with a resounding 3-0 win over Crystal Palace.

West Ham United vs Leicester City: The two clubs will be involved in the final match of the second round and will be poised to get favorable results. The pair is expected to finish among the top 10 at the end of the season and will look to build on their respective wins from last week.

Team news for matchday one

Here's who's out or available for the second round of matches of the 2021/22 Premier League season: