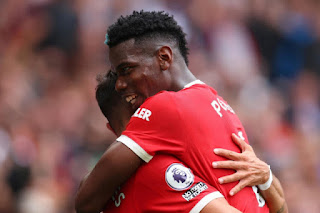 At long last, the latest installment of Premier League action finally got underway, and boy, was it entertaining. That's no surprise though, as the English top flight is arguably the most popular league in world football, and from Friday through Sunday, fans were kept on their toes. None of the ten matches finished as a boring scoreless draw, and seven games saw three or more goals scored; two even resulted in six-goal thrillers.

Here's all you need to know following matchday one of the 2021/22 Premier League season, which truly started off with its fair share of fireworks.

Top five teams in the Premier League up to August 16

It was a successful opening day for several of England's "Big Six" sides, with Manchester United, Chelsea, and Liverpool all recording wins. Tottenham also beat Manchester City, but aren't in the top five due to their inferior goal difference (they beat the Cityzens 1-0)

Who are the top three scorers in the Premier League?

Manchester United star Bruno Fernandes had a brilliant day at the office during the Red Devils' season opener, with the Portuguese international scoring a hat-trick as his team cruised to a comfortable 5-1 win over Leeds United on Saturday.

Note: there are many other players currently on one goal, including Chelsea duo Marcos Alonso and Trevoh Chalobah, as well as Liverpool ace Roberto Firmino, all of whom got off the mark in their team's respective victories this weekend.

A day to remember for Manchester United...: What a way to begin the season for Manchester United. Playing at home in front of tens of thousands of Old Trafford fans, the Red Devils put on a swashbuckling performance as they crushed rivals Leeds United in a resounding 5-1 win. Next up for the English giants, who finished in second spot last season, will be an away clash with Southampton. Will they continue onwards and upwards as they seek to end their wait for a Premier League crown?

...but one to forget for cross-town rivals Manchester City: Unfortunately for Manchester City, their title defense got off on the wrong footing as they slumped to a 1-0 loss to Tottenham. And in doing so, Pep Guardiola's men join a rather unwanted group: they're just one of three sides to lose their opening match as reigning champs since the Premier League's inception in 1992. City follow in the footsteps of Leicester (2016/17) and Chelsea (2017/18) to stumble on matchday one, but all hope isn't lost. Manchester United also lost their opening games and still went on to win the title on three occasions - 1993, 1996, and most recently, in 2013.

Arsenal kick off season on a foul note: For the first time since the 1994/95 season, there's absolutely no European football for the Arsenal after finishing in an embarrassing eighth in the table. Certainly, fans were hoping that the disaster from last season was just a minor blip - but unfortunately not, as Mikel Arteta's men suffered a humiliating 2-0 defeat to newly promoted Brentford on Friday, August 13th. Indeed, Friday the 13th brought nothing but bad luck for Arsenal, who will next face Chelsea in a highly-anticipated London derby on August 22nd.

While London rivals Chelsea and Spurs get the results: No Kane, no problem for Spurs, who, thanks to Son Heung-Min gave new coach Nuno plenty to celebrate. They'll hope to continue in this way as a top four finish is certainly a must after having to settle for the Europa Conference League this season. Meanwhile, Chelsea cruised to a very comfortable 3-0 win over fellow London-based side Crystal Palace on Saturday, which was the perfect result for Thomas Tuchel's men following their UEFA Super Cup win over Spanish outfit Villarreal only three days prior.

Liverpool also get off the mark: It was also a good day for the Reds and their fans, who will be hoping to mount another title challenge after being totally eclipsed by Manchester City last season. Jurgen Klopp's men will be looking to re-assert themselves as a dominant force not just in England, but on the continent at large, and having managed to hang on to most of their key players - for now - they'll be looking to get off the mark as quickly as possible.

Liverpool vs Burnley: The Reds will be looking to make it two wins in two as they host Burnley, who will be hoping to avoid a second straight defeat after losing to Brighton in their season opener last weekend.

Manchester City vs Norwich City: This will be a perfect opportunity for the Cityzens to get back on track following their opening day loss as they'll be taking on freshly promoted Norwich on home turf.

Southampton vs Manchester United: After their resounding win over Leeds, the Red Devils will look to continue marching on when they travel to face Southampton, who ended up losing 3-1 to Everton on Saturday.

Wolves vs Spurs: This will be a very interesting one, as new Spurs coach Nuno will be facing many of the players he coached while in charge of Wolves. The hosts may have lost their opening match, but as they showed last season, they're not a side to be underestimated, and Nuno will certainly know that better than most.

Arsenal vs Chelsea: This game is always one not to miss as it will feature two of not just London's, but Europe's biggest clubs. Will Chelsea continue in the same vein of form and pick up another three points, or will Arsenal be able to rebound after their poor performance and start to turn things around?