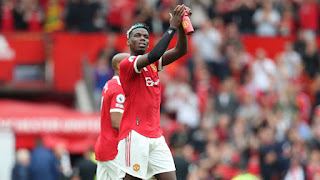 Paul Pogba underlined his exceptional quality again as Manchester United kicked off their 2021/22 Premier League campaign with a 5-1 thrashing of fierce rivals Leeds at Old Trafford. An unplayable Pogba racked up four assists in the game, matching a feat only previously achieved by six others in 30 seasons of Premier League competition. His range of passing, vision and strength on the ball was second to none, meaning that Leeds could not get near him. The Frenchman will always have his critics, but it is another reminder just why United made him the world’s most expensive player when they re-signed him from Juventus in 2016. Pogba’s contract at Old Trafford is up at the end of the season and the union looks increasingly likely to come to an end for the second time. He will have the option to formally negotiate with overseas clubs as of 1 January and is keen to explore his options for the last big contract of his career. Paris Saint-Germain are expected to offer him the chance to play professionally in his homeland for the first time, while Juventus want him back. Real Madrid could also resurrect their interest if there is no need for a transfer fee next summer. United have been equally unsure about how to proceed. 90min revealed in July that some club officials want him to sign a new contract, conscious of the fact that if his deal expires there will be no transfer fee to recoup any of the £89m investment.

Pogba has been approached about a new contract and agent Mino Raiola has engaged with the club. But others at Old Trafford are less certain. Any new deal would likely have to be worth £400,000 per week and there are doubts over whether he should be retained at that cost. If any lessons can be learned from Arsenal’s plight, it would be that throwing record contracts at players of 29 or 30 in a desperate attempt to get them to stay is probably not advisable.

Pogba has only once publicly given an indication that he would be interested in leaving United, expressing a desire for a ‘new challenge’ in the summer of 2019 in the wake of Jose Mourinho’s ultimately disastrous United tenure. But not since. Conversely, Raiola hasn’t shied away from publicly stirring the pot and the player’s disinclination to correct or clarify his outspoken agent’s comments is perhaps telling in itself. However, Pogba’s unresolved future hasn’t affected his performance over the last 18 months. He has looked far more comfortable and not unhappy playing for United ever since returning to action during ‘Project Restart’ following long-term foot and ankle injuries. The team’s significant upturn in fortunes thanks to the 2020 arrival of Bruno Fernandes is unlikely a coincidence in that. All Pogba ever wanted at United upon his return in 2016 was to be part of a good team that could compete for major trophies. He hasn’t ever really had that until now, with Ole Gunnar Solskjaer’s overhaul and rebuild of the squad only just putting the club back into contention. United were still thought to be a year away from properly challenging for the Premier League title. But the manner in which they have started the new season, without even reaching full strength in terms of fitness and personnel, as well as Manchester City’s surprising struggles – losing back-to-back games in the Community Shield and league opener – suddenly offer hope it could be sooner.

If Pogba continues to perform as he did against Leeds and United as a whole maintain that level or even get better as the season progresses, a first Premier League title since 2013 could be on the cards. If it does happen, Pogba will have had a huge role in making it happen and that might actually be the perfect farewell for player and club as a parting gift and stepping stone into a new era.