Ronald Koeman is far from happy with the uncertainty over Ilaix Moriba's future at Barcelona amid a contract stand-off. 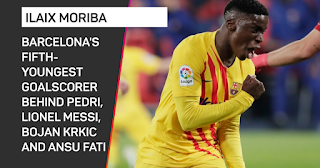 Ronald Koeman says the situation with Ilaix Moriba at Barcelona is "horrible", claiming the teenager and his advisors are prioritising money over his career. Moriba broke into the Barca first team in 2020-21, making 14 appearances in LaLiga and scoring his first goal as a substitute in the 2-0 win over Osasuna in March. Barca have been in talks with the midfielder over a new contract, with his deal expiring next year, but little progress has been made in recent weeks. Moriba was effectively sidelined for pre-season as the impasse continued and clubs began to be linked with offers, with Premier League sides including Manchester City and Liverpool said to be interested. According to Sport, RB Leizpig have made an approach worth €8million, although Barca want closer to €15m if they are to sell. The stand-off has left head coach Koeman deeply unimpressed as he believes Moriba should be a key part of the future of the first team. "I talked with Ilaix two or three weeks ago. His situation, for me, is horrible," the Dutchman said on Friday. "He's young. He's 18, he had the opportunity to play for Barca and he's the future of the club. And he doesn't play, he's not with us. "At 18, the most important thing is to play, not money. But Ilaix and his people think differently. I'm disappointed with that because I believe more in football than in contracts. "Money at 18 cannot be the most important thing." Barca's spiralling levels of debt have made sales essential if Koeman wishes to add any further players to his squad. Martin Braithwaite and Philippe Coutinho have both been tipped to leave but Koeman would prefer to keep them as he seeks ways to soften the blow left by the departure of Lionel Messi. Clement Lenglet is also expected to stay, but Samuel Umtiti and Miralem Pjanic could be moved on. "We're in a situation at the club where we listen to offers in a lot of cases, but Martin's doing well with us. I believe he has to stay," he said of Braithwaite. "He's important for us. I like working with him a lot because he's disciplined and he accepts his role. He plays in different positions in attack and the other day we saw that he can score goals. We'll see." On the defenders, he said: "I'm really happy to have five or six centre-backs. It's an important position for which there's a lot of competition, and we need them. "Umtiti has fewer possibilities than the others. Lenglet is our only left-footer. He has a place and he'll have games. After the break, the matches start every three days and we need all the players. "Pjanic and Umtiti will find it difficult to have minutes. The final decision is the player's, but they have a complicated situation, yes." He added on Coutinho: "Philippe is out because I think he needs one more week of training and to be with the group before being added to the squad. And yes, I count on him because for me he's a great player. "He can be important because he has effectiveness in his play. He can play in different positions. We need people like him. "With Messi, we've lost a lot of goals and we have to look for goals in other players." Koeman also revealed Pedri will play against Athletic Bilbao on Saturday but will then be given a two-week holiday following his exploits at Euro 2020 and then the Olympics with Spain. "We've had time to think about what the best thing is for Pedri. We've decided that he'll play tomorrow, and then afterwards he'll have two weeks of holiday so he doesn't get to November or December overloaded," he said. "I've spoken with [Spain coach] Luis Enrique. We'll give him two weeks of holiday because he needs it. It's impossible to endure what he's endured and he deserves a holiday of at least two weeks."
Football