Rumour Has It: Kane frustrated with Tottenham as Man City launch £125m bid 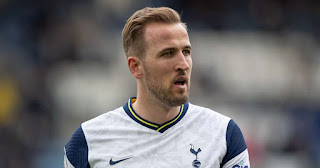 Manchester City's interest in signing Tottenham's Harry Kane is widely known but a deal appears no closer to materialising. The 28-year-old forward was absent for the two sides' Premier League game on Sunday, when Spurs took the points. City have reportedly bid up to £125 million to sign the England international, who reportedly requested a move late last season.
TOP STORY - KANE FRUSTRATED AS SPURS REJECT CITY BID
Kane has grown frustrated with Tottenham chairman Daniel Levy and thrown down the gauntlet with a proposed move to Manchester City, reports The Telegraph. According to the report, the England forward feels that Levy has not honoured their meeting at the end of the 2019-20 season when he requested to leave Spurs if they underachieved. Kane is also frustrated that Levy's tactics have seen fans turned against him and that the chairman is also refusing to sell or even accept calls from City. The report claims that City have submitted a fresh £125m bid for Kane, which Spurs have turned down.
ROUND-UP
- El Larguero claims that Paris Saint-Germain director Leonardo has informed the players that Kylian Mbappe will stay to see out the remainder of his contract, due to expire in mid-2022, scuppering Real Madrid's hopes of signing him this month or in January.
- Samuel Umtiti, Martin Braithwaite and Miralem Pjanic are all on the chopping block at Barcelona, according to Diario AS, which claims the Catalans must sell three players this month to reduce their salary bill despite Lionel Messi's exit.
- Martin Odegaard is set to re-join Arsenal on a permanent deal from Real Madrid, says Fabrizio Romano. Talks are at their final stages with a deal until 2026.
- Tottenham are keen on Chelsea defender Kurt Zouma, reports Sky Sports. The Blues would demand a £25 million fee for the Frenchman. - Internazionale are in talks to sign forward Marcus Thuram from Moenchengladbach, claims Sky Sport Italia.
- The Sun reports that Wolves are talking to Olympiacos about signing Portuguese defender Ruben Semedo on a one-year loan.
Football